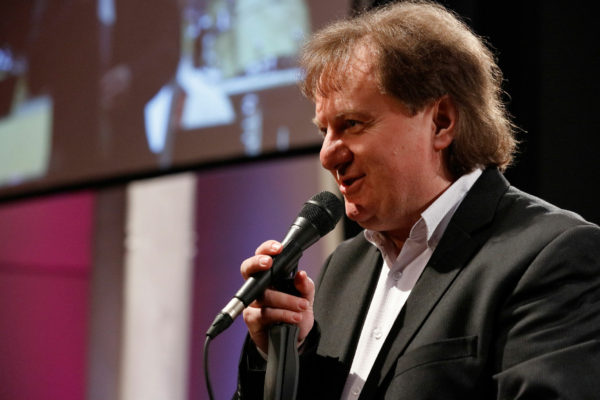 Fritz K Renold is the musical director of the ‘Bandstand Learning with Role Models’ platform at Jazzaar Festival since its inception in 1992.

Fritz K Renold is a Swiss saxophonist, composer and musical director of the Jazzaar Festival. Already in 1987 Renold was elected as the youngest member of the faculty of the Berklee College of Music. Since February 1997 Fritz Renold and the “Bostonian Friends” have been under contract with SONY – BMG Music – Columbia Records in New York. Renold’s work includes over 1500 compositions and arrangements, many of which have been recorded on Shanti Records, EPM Records and SONY Music, Columbia Records. With the concept “Bandstand Learning With “Role Models”, which he developed together with his wife Helen Savari, he integrates international jazz stars with young talents from the Swiss music scene.
Over the past 30 years he has worked with Randy Brecker, Mike Mainieri, Cecil Bridgewater, Benny Golson, Buster Williams, Christian Jacob, Britt Woodman, Bob Berg, Victor Lewis, Harvie S, Jerry Bergonzi, Benny Bailey, Mark Soskin, Bill Pierce, Billy Cobham, Michael Baker, John Aebercrombie, Miroslav Vitous, Alphonso Johnson and still many more. Renold is the author of e-learning courses that is planned for the near future. Since 1997, Renold has been pre-nominated multiple times for a Grammy Award.

His latest original work “A New Creature” is premiered at the virtual Jazzaar Festival 2022.

All Sessions By Fritz K Renold

Concert: A Tribute to Chick Corea